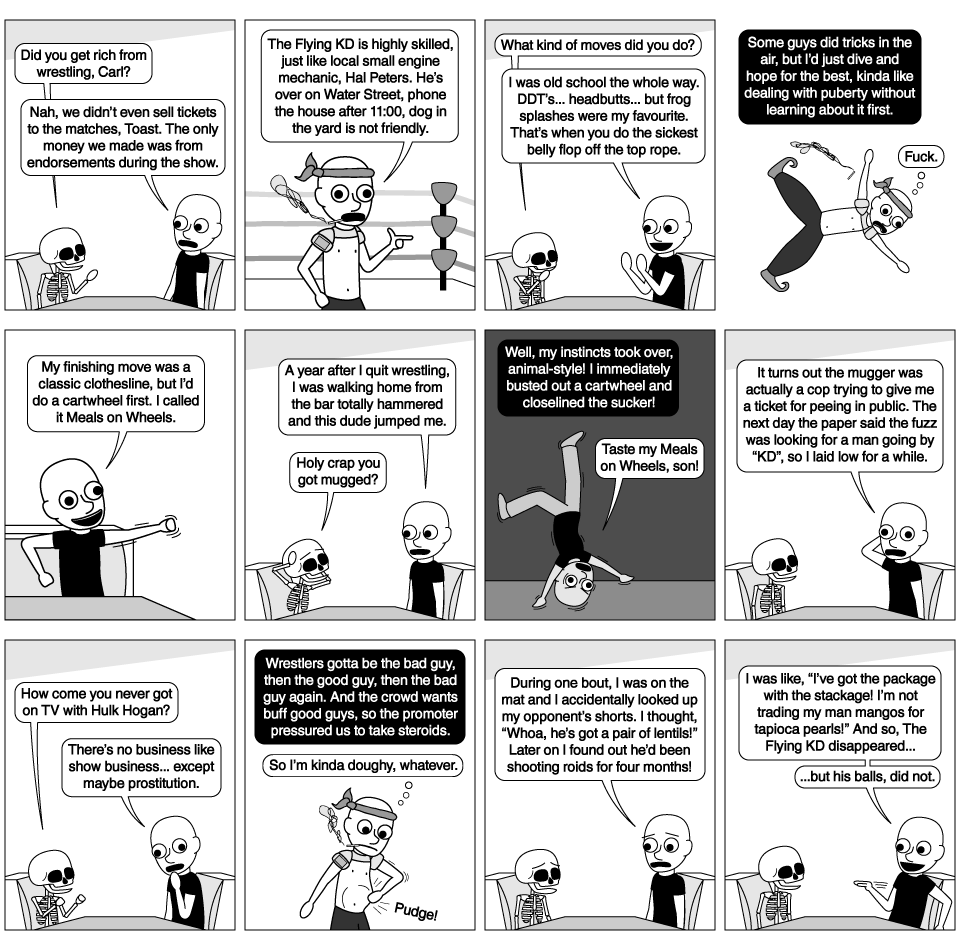 The Rise and Fall of The Flying KD

Did you get rich from wrestling, Carl?

Nah, we didn’t even sell tickets to the matches, Toast. The only money we made was from endorsements during the show.

The Flying KD is highly skilled, just like local small engine mechanic, Hal Peters. He’s over on Water Street, phone the house after 11:00, dog in the yard is not friendly.

What kind of moves did you do?

I was old school the whole way. DDT’s… headbutts… but frog splashes were my favourite. That’s when you do the sickest belly flop off the top rope.

Some guys did tricks in the air, but I’d just dive and hope for the best, kinda like dealing with puberty without learning about it first.

My finishing move was a classic clothesline, but I’d do a cartwheel first. I called it Meals on Wheels.

A year after I quit wrestling, I was walking home from the bar totally hammered and this dude jumped me.

Holy crap you got mugged?

Well, my instincts took over, animal-style! I immediately busted out a cartwheel and closelined the sucker!

Taste my Meals on Wheels, son!

It turns out the mugger was actually a cop trying to give me a ticket for peeing in public. The next day the paper said the fuzz was looking for a man going by “KD”, so I laid low for a while.

How come you never got on TV with Hulk Hogan?

There’s no business like show business… except maybe prostitution.

So I’m kinda doughy, whatever.

During one bout, I was on the mat and I accidentally looked up my opponent’s shorts. I thought, “Whoa, he’s got a pair of lentils!” Later on I found out he’d been shooting roids for four months!

I was like, “I’ve got the package with the stackage! I’m not trading my man mangos for tapioca pearls!” And so, The Flying KD disappeared…
…but his balls, did not