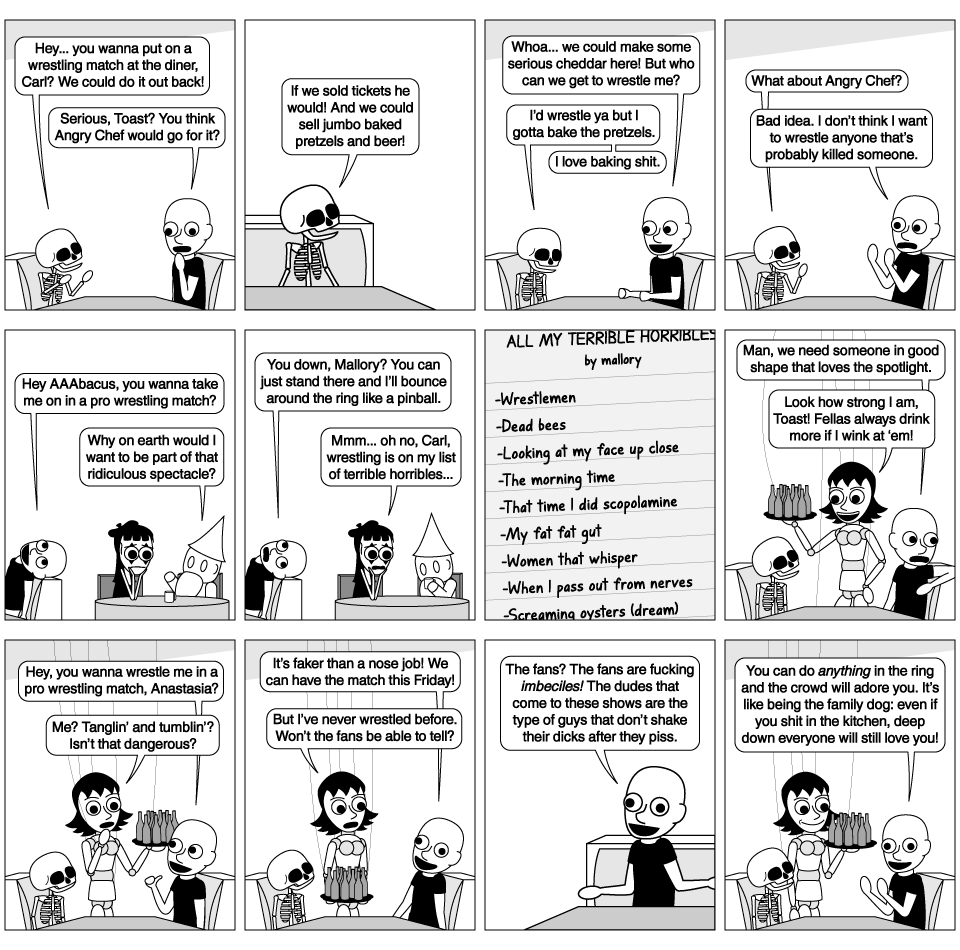 Hey… you wanna put on a wrestling match at the diner, Carl? We could do it out back!

Serious, Toast? You think Angry Chef would go for it?

If we sold tickets he would! And we could sell jumbo baked pretzels and beer!

Whoa… we could make some serious cheddar here! But who can we get to wrestle me?

I’d wrestle ya but I gotta bake the pretzels.

What about Angry Chef?

Bad idea. I don’t think I want to wrestle anyone that’s probably killed someone.

Hey AAAbacus, you wanna take me on in a pro wrestling match?

Why on earth would I want to be part of that ridiculous spectacle?

You down, Mallory? You can just stand there and I’ll bounce around the ring like a pinball.

Mmm… oh no, Carl, wrestling is on my list of terrible horribles…

ALL MY TERRIBLE HORRIBLES

Man, we need someone in good shape that loves the spotlight.

Look how strong I am, Toast! Fellas always drink more if I wink at ‘em!

Hey, you wanna wrestle me in a pro wrestling match, Anastasia?

Me? Tanglin’ and tumblin’? Isn’t that dangerous?

It’s faker than a nose job! We can have the match this Friday!

But I’ve never wrestled before. Won’t the fans be able to tell?

The fans? The fans are fucking imbeciles! The dudes that come to these shows are the type of guys that don’t shake their dicks after they piss.

You can do anything in the ring and the crowd will adore you. It’s like being the family dog: even if you shit in the kitchen, deep down everyone will still love you!