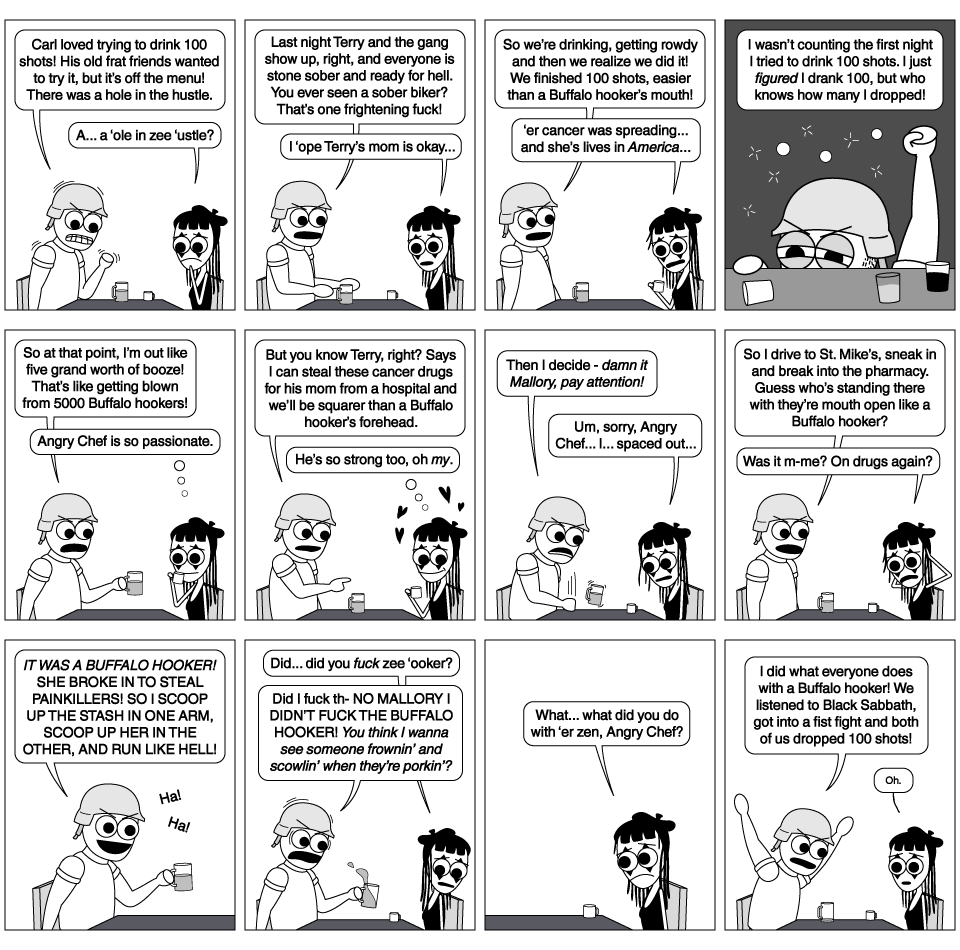 Carl loved trying to drink 100 shots! His old frat friends wanted to try it, but it’s off the menu! There was a hole in the hustle.

Last night Terry and the gang show up, right, and everyone is stone sober and ready for hell. You ever seen a sober biker? That’s one frightening fuck!

I ‘ope Terry’s mom is okay…

So we’re drinking, getting rowdy and then we realize we did it! We finished 100 shots, easier than a Buffalo hooker’s mouth!

‘er cancer was spreading… and she’s lives in America…

I wasn’t counting the night I tried to drink 100 shots. I just figured I drank 100, but who knows how many I dropped!

So at that point, I’m out like five grand worth of booze! That’s like getting blown from 5000 Buffalo hookers!

Angry Chef is so passionate.

But you know Terry, right? Says I can steal these cancer drugs for his mom from a hospital and we’ll be squarer than a Buffalo hooker’s forehead.

Then I decide – damn it Mallory, pay attention!

So I drive to St. Mike’s, sneak in and break into the pharmacy. Guess who’s standing there with they’re mouth open like a Buffalo hooker?

Was it m-me? On drugs again?

IT WAS A BUFFALO HOOKER! SHE BROKE IN TO STEAL PAINKILLERS! SO I SCOOP UP THE STASH IN ONE ARM, SCOOP UP HER IN THE OTHER, AND RUN LIKE HELL!

Did… did you fuck zee ‘ooker?

Did I fuck th- NO MALLORY I DIDN’T FUCK THE BUFFALO HOOKER! You think I wanna see someone frowning and scowling when they’re porkin’?

What… what did you do with ‘er zen, Angry Chef?

I did what everyone does with a Buffalo hooker! We listened to Black Sabbath, got into a fist fight and both of us dropped 100 shots!